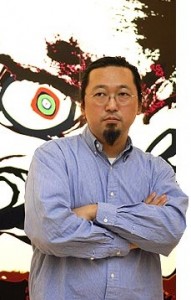 Japanese painter and sculptor. Murakami became disillusioned with the Japanese art market; believing it too elitist, he embarked on a career in contemporary art that has sought to embrace both high and low culture in Japan. Murakami’s art appropriates the art of anime and its culture of geeks, otaku, whom he feels are villanized in Japan despite their place as a driving force in Japanese popular culture. He refers to his style of art as superflat, stemming from the lack of visual depth in anime that Murakami sees as an underlying trend of all Japanese art. In addition to creating works of fine art derived from these low culture sources, Murakami also produces a wide range of commercial goods, ranging from posters and key-chains to a line of limited-edition handbags for Louis Vuitton. He maintains two studios, one in New York and one in Japan, where he acts as a mentor to the young artists that assist him in producing his works.