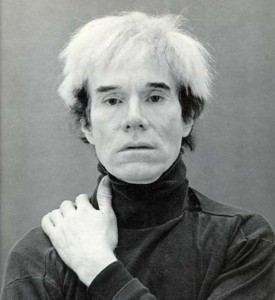 American painter, printmaker, sculptor, draughtsman, illustrator, film maker, writer and collector. Andy Warhol was the only Pop artist to come from a blue collar background. Born in 1928 into the slums of Pittsburgh, Andrew Warhola was the fourth child of immigrant parents who barely spoke English. After studying at the Carnegie Institute of Technology in Pittsburgh from 1945 to 1949, he moved to New York and began working as a commercial artist and illustrator for magazines and newspapers. Much of his work was commissioned by fashion houses, was charming and often whimsical in tone, typified by outline drawings using a delicate blotted line that gave even the originals a printed appearance; a campaign of advertisements for the shoe manufacturers I. Miller & Sons in 1955–60. He was a successful commercial artist, famous for his whimsical drawings of shoes, cats, flowers and angels. Still, he craved recognition as a fine artist, and had begun making brutal paintings of nose jobs and campy reproductions of comic strips. His first iconic image, a painting of a Campbell’s soup can, was particularly admired, helping to earn him major awards from the Art Directors Club. In the first part of his career he was an iconoclast, in the second, the artist as businessman. Most people believe Andy Warhol to be the greatest American artist of the second half of the 20th century.