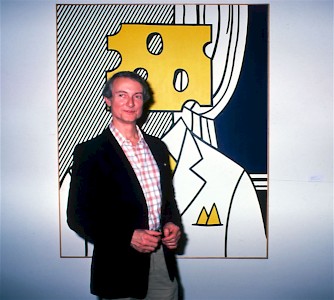 Lichtenstein is acknowledged as an innovator of image appropriation who crafted Pop Art masterpieces that redefined the boundaries between High and Low art through an ironical interplay of popular culture and fine art. His comic strip-inspired paintings of Romance and War subjects, derived from everyday common sources, are now themselves cultural talismans of the late 20th century. His borrowings from commercial printing techniques, such as Benday dots, were prescient harbingers of the increasing influence of our media saturated times. Along with other Pop artists such as Warhol, Lichtenstein's style and frame of reference was a conscious step away from tradition, whether in the classical mode of narrative composition or the emphasis on the artist's touch championed by the more recent Abstract Expressionists. Unlike Warhol, however, who pioneered the silkscreen process to transfer his images to canvas, Lichtenstein at the start magnified and transferred his images by hand in a painstaking process that insistently removed all the expressionistic detail of brushwork, further divesting the image of naturalistic representation by heightening the heavy stylization of the comic book source.