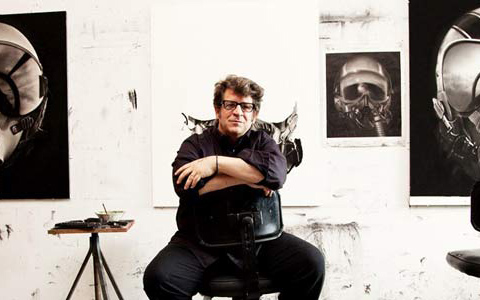 American painter and sculptor.  He was born January 7, 1953 in Brooklyn, New York.  Longo became famous in the 1980s for his "Men in the Cities" series, which depicted sharply dressed businessmen writhing in contorted emotion.  He had a childhood fascination with mass media: movies, television, magazines, and comic books, which continue to influence his art.

Longo began college at the University of North Texas, in the town of Denton, but left before getting a degree. He later studied sculpture under Leonda Finke, who encouraged him to pursue a career in the visual arts. In 1972, Longo received a grant to study at the Accademia di Belle Arti in Florence, Italy. Upon his return to New York, Longo enrolled at Buffalo State College, where he received a BFA in 1975. While at Buffalo State, he studied under, and was likely influenced by Art professor Joseph Piccillo. At this time he was associated with artist Cindy Sherman, who was also studying art at Buffalo State.

In college, Longo and his friends established an avant garde art gallery in their co-op building, the Essex Art Center, which was originally a converted ice factory; the gallery became Hallwalls Contemporary Art Center. Through his gallery efforts, Longo met many local and New York City artists. Longo eventually moved to New York City to join the underground art scene of the 1970s.