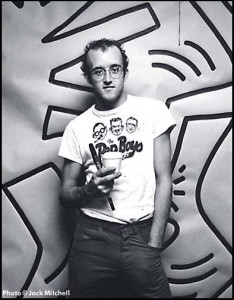 American painter. In 1978 he moved to New York to attend the School of Visual Arts, where his original approach was soon apparent in graffiti-inspired symbols expanded into large-scale designs of generative energy. At the height of the Punk Rock movement in the late 1970s he participated in the lively New York club scene, working with such street artists as ‘Samo’ (Jean-Michel Basquiat). In the summer of 1980 he took up drawing, inventing intricate cartoon-style murals of mutant figures locked in hyper-physical engagement. He was a meteoric star in American art during the 1980s, exhibiting and working on projects throughout the USA, Europe and Asia, and his work became a symbol of the tribal undercurrents that permeate metropolitan life. His accessible imagery stems as much from Islamic and Japanese art as the sign language of contemporary culture. In 1986 the artist opened his own retail outlet, The Pop Shop, in New York and was continuously engaged in projects of an extraordinarily diverse nature, from murals on the Berlin Wall to paintings on hot air balloons, motor cars and decorative accessories. A giant ‘spectacolour’ billboard broadcast his famous Radiant Child image in Times Square, first in 1982. He fell victim to the AIDS epidemic in 1988 and died at the age of 31.

Story of Red and Blue