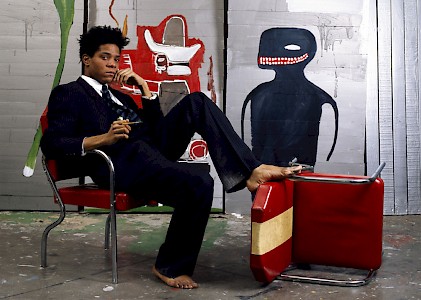 Jean‑Michel Basquiat (December 22, 1960 – August 12, 1988) was an American artist. He first achieved notoriety as part of SAMO, an informal graffiti duo who wrote enigmatic epigrams in the cultural hotbed of the Lower East Side of Manhattan during the late 1970s where the hip hop, post-punk, and street art movements had coalesced. By the 1980s, he was exhibiting his neo-expressionist paintings in galleries and museums internationally.

His father, Gerard Basquiat, was born in Port-au-Prince, Haiti, and his mother, Matilde Basquiat, who was of Puerto Rican descent, was born in Brooklyn, New York. Matilde instilled a love for art in her young son by taking him to art museums in Manhattan and enrolling him as a junior member of the Brooklyn Museum of Art.  Basquiat was a precocious child who learned how to read and write by age four and was a gifted artist. His teachers, such as artist Jose Machado, noticed his artistic abilities, and his mother encouraged her son's artistic talent. By the age of 11, Basquiat could fluently speak, read and write French, Spanish and English.

In September 1968, when Basquiat was about eight, he was hit by a car while playing in the street. His arm was broken and he suffered several internal injuries, and he eventually underwent a splenectomy. While he was recuperating from his injuries, his mother brought him the Gray's Anatomy book to keep him occupied. This book would prove to be influential in his future artistic outlook. His parents separated that year and he and his sisters were raised by their father.  The family resided in Boerum Hill, Brooklyn, for five years, then moved to San Juan, Puerto Rico in 1974. After two years, they returned to New York City.

When he was 13, his mother was committed to a mental institution and thereafter spent time in and out of institutions.  At 15, Basquiat ran away from home.  He slept on park benches in Tompkins Square Park, and was arrested and returned to the care of his father within a week.

Basquiat dropped out of Edward R. Murrow High School in the tenth grade and then attended City-As-School, an alternative high school in Manhattan home to many artistic students that have been failed by conventional schooling. His father banished him from the household for dropping out of high school and Basquiat stayed with friends in Brooklyn. He supported himself by selling T-shirts and homemade post cards.

Basquiat's art focused on "suggestive dichotomies", such as wealth versus poverty, integration versus segregation, and inner versus outer experience. He appropriated poetry, drawing, and painting, and married text and image, abstraction, and figuration, and historical information mixed with contemporary critique.

Basquiat used social commentary in his paintings as a "springboard to deeper truths about the individual", as well as attacks on power structures and systems of racism, while his poetics were acutely political and direct in their criticism of colonialism and support for class struggle.

Career started in 1976, when Basquiat and friend Al Diaz began spray painting graffiti on buildings in Lower Manhattan, working under the pseudonym SAMO. The designs featured inscribed messages such as "Plush safe he think.. SAMO" and "SAMO as an escape clause". In 1978, Basquiat worked for the Unique Clothing Warehouse, in their art department, at 718 Broadway in NoHo and at night he became "SAMO" painting his original graffiti art on neighborhood buildings. Unique's founder Harvey Russack discovered Basquiat painting a building one night, they became friends, and he offered him a day job. On December 11, 1978, The Village Voice published an article about the graffiti. When Basquiat and Diaz ended their friendship, The SAMO project ended with the epitaph "SAMO IS DEAD," inscribed on the walls of SoHo buildings in 1979.

In 1979, Basquiat appeared on the live public-access television cable TV show TV Party hosted by Glenn O'Brien, and the two started a friendship. Basquiat made regular appearances on the show over the next few years. That same year, Basquiat formed the noise rock band Test Pattern – which was later renamed Gray – which played at Arleen Schloss's open space, "Wednesdays at A's", where in October 1979 Basquiat showed, among others, his SAMO color Xerox work.

Gray also consisted of Shannon Dawson, Michael Holman, Nick Taylor, Wayne Clifford and Vincent Gallo, and the band performed at nightclubs such as Max's Kansas City, CBGB, Hurrah and the Mudd Club. In 1980, Basquiat starred in O'Brien's independent film Downtown 81, originally titled New York Beat. That same year, Basquiat met Andy Warhol at a restaurant. Basquiat presented to Warhol samples of his work, and Warhol was stunned by Basquiat's genius and allure. The two artists later collaborated. Downtown 81 featured some of Gray's recordings on its soundtrack.v Basquiat also appeared in the 1981 Blondie music video "Rapture," in a role originally intended for Grandmaster Flash, as a nightclub disc jockey.

The early 1980s were Basquiat's breakthrough as a solo artist. In June 1980, Basquiat participated in The Times Square Show, a multi-artist exhibition sponsored by Collaborative Projects Incorporated (Colab) and Fashion Moda. In September of the same year, Basquiat joined the Annina Nosei gallery and worked in a basement below the gallery toward his first one-man show, which took place in March 1981 with great success. In December 1981, René Ricard published "The Radiant Child" in Artforum magazine, which brought Basquiat to the attention of the art world.

In March 1982 he worked in Modena, Italy and from November, Basquiat worked from the ground-floor display and studio space Larry Gagosian had built below his Venice, California home and commenced a series of paintings for a 1983 show, his second at Gagosian Gallery, then in West Hollywood. He brought along his girlfriend, then unknown aspiring singer Madonna. During this time he took considerable interest in the work that Robert Rauschenberg was producing at Gemini G.E.L. in West Hollywood, visiting him on several occasions and finding inspiration in the accomplishments of the painter. In 1982, Basquiat also worked briefly with musician and artist David Bowie.

In 1983, Basquiat produced a 12" rap single featuring hip-hop artists Rammellzee and K-Rob. Billed as Rammellzee vs. K-Rob, the single contained two versions of the same track: "Beat Bop" on side one with vocals and "Beat Bop" on side two as an instrumental.  The single was pressed in limited quantities on the one-off Tartown Record Company label. The single's cover featured Basquiat's artwork, making the pressing highly desirable among both record and art collectors.

At the suggestion of Swiss dealer Bruno Bischofberger, Warhol and Basquiat worked on a series of collaborative paintings between 1983 and 1985. In the case of Olympic Rings (1985), Warhol made several variations of the Olympic five-ring symbol, rendered in the original primary colors. Basquiat responded to the abstract, stylized logos with his oppositional graffiti style. Basquiat often painted in expensive Armani suits and would even appear in public in the same paint-splattered clothes.

"Basquiat's canon revolves around single heroic figures: athletes, prophets, warriors, cops, musicians, kings and the artist himself. In these images the head is often a central focus, topped by crowns, hats, and halos. In this way the intellect is emphasized, lifted up to notice, privileged over the body and the physicality of these figures (i.e. black men) commonly represent in the world."

— Kellie Jones, Lost in Translation: Jean-Michel in the (Re)Mix

A middle period from late 1982 to 1985 featured multi-panel paintings and individual canvases with exposed stretcher bars, the surface dense with writing, collage and imagery. The years 1984–85 were also the main period of the Basquiat–Warhol collaborations, even if, in general, they weren't very well received by the critics.

By 1986, Basquiat had left the Annina Nosei gallery, and was showing at the Mary Boone gallery in SoHo. On February 10, 1985, he appeared on the cover of The New York Times Magazine in a feature titled "New Art, New Money: The Marketing of an American Artist". He was a successful artist in this period, but his growing heroin addiction began to interfere with his personal relationships.

When Andy Warhol died on February 22, 1987, Basquiat became increasingly isolated, and his heroin addiction and depression grew more severe.  Despite an attempt at sobriety during a trip to Maui, Hawaii, he died on August 12, 1988, of a heroin overdose at his art studio on Great Jones Street in Manhattan's NoHo neighborhood. He was 27.

Basquiat was interred in Brooklyn's Green-Wood Cemetery, where Jeffrey Deitch made a speech at the graveside. Among those speaking at Basquiat’s memorial held at Saint Peter's Church on November 3, 1988, were Ingrid Sischy who, as the editor of Artforum in the 1980s, got to know the artist well and commissioned a number of articles that introduced his work to the wider world. Suzanne Mallouk recited sections of A. R. Penck's Poem for Basquiat and Fab 5 Freddy read a poem by Langston Hughes.  The 300 guests included the musicians John Lurie and Arto Lindsay; the artist Keith Haring; the poet David Shapiro; Glenn O'Brien, a writer; Fred Brathwaite, an actor and artist, and members of the band Gray, which Basquiat led in the late 1970s. In memory of the late artist, Keith Haring created Pile of Crowns for Jean-Michel Basquiat (1988).

"Basquiat speaks articulately while dodging the full impact of clarity like a matador. We can read his pictures without strenuous effort—the words, the images, the colors and the construction—but we cannot quite fathom the point they belabor. Keeping us in this state of half-knowing, of mystery-within-familiarity, had been the core technique of his brand of communication since his adolescent days as the graffiti poet SAMO. To enjoy them, we are not meant to analyze the pictures too carefully. Quantifying the encyclopedic breadth of his research certainly results in an interesting inventory, but the sum cannot adequately explain his pictures, which requires an effort outside the purview of iconography ... he painted a calculated incoherence, calibrating the mystery of what such apparently meaning-laden pictures might ultimately mean."

Basquiat sold his first painting in 1981, and by 1982, spurred the Neo-Expressionist art boom... His work was and still is in great demand. Basquiat's paintings now comand figures in the tens of millions with no holding back.