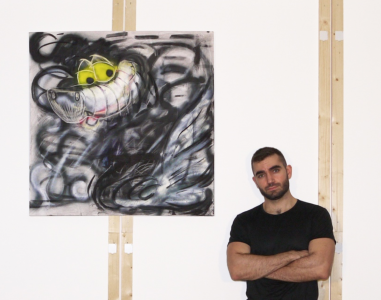 Andreas Stylianou (Cypriot, b.1990) is a Contemporary artist that lives and works between London and Nicosia. He studied at the Architectural Association (London) and received a Master’s degree from the Royal Collage of Art (London) and IE Business School (Madrid). Trained as an Architect, Andreas always suppressed his creativity, until one day he moved into an artist studio and started painting as if that’s what he was meant to be doing all his life. His bold work of familiar characters with subtle autobiographical references, is a manifestation of his artistic expression, where choices are influenced by modern and contemporary masters such as Gerhard Richter, Wolfgang Tillmans and George Condo. He attacks a raw canvas head on, layering different media while mark making to create the composition liberated from any restrains.