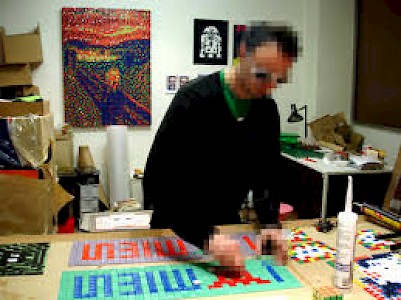 Invader is the pseudonym of a well-known French urban artist, born in 1969, whose work is modelled on the crude pixellation of 1970s-1980s 8-bit video games. He took his name from the 1978 arcade game Space Invaders, and much of his work is composed of square ceramic tiles inspired by video game characters.  His distinctive creations can be seen in many highly-visible locations in more than 65 cities in 33 countries. He documents each intervention in a city as an "Invasion", and has published books and maps of the location of each of his street mosaics.  Invader sees himself as a hacker of public space spreading a virus of mosaic; the streets are his canvas, his invasions gifts to the city and its people.  He believes that museums and galleries are not accessible to everyone, so deliberately makes his works public by installing them at street level for ordinary people to enjoy on a daily basis. Although many of his works feature the signature aliens, no two pieces are alike. The subject matter may also be themed and adapted to their context. Invader's repertoire of subjects now includes Star Wars characters (London), as well as the Pink Panther and Mega Man (Paris). Sites near major bank buildings are marked with dollar sign mosaics. His works in Hong Kong have a more oriental theme: with some martial arts characters; gold and red colours have been employed more often to reflect the traditional Chinese colours for fire and earth

Invader works incognito, often masked and largely at night. To guard his anonymity on camera during interviews, he pixellates his own image or wears a mask as a disguise.  He claims that only a few people know his real name and his face, and that even his parents think he works as a tiler in the construction industry.

By June 2011, Invader had travelled around the world six times and spent 22 nights in prison cells.  Invader accepts arrest as an occupational hazard. He was arrested in 2010 for placing a mosaic on the Hollywood sign, charged with vandalism and made to pay a fine. In July 2011, the Los Angeles Police Department detained two French nationals on suspicion of vandalism near MOCA's Little Tokyo gallery with tile and grout in hand. The police asserted that one of them was Invader, but released the pair without charge. He was also arrested by plain-clothed police in October 2013 in New York, just as he had completed installing a mural in Orchard Street in East Village in the early hours. He was again fined; the owner of the building took down the work and had it preserved.  Invader said that whilst creating installations he had been accosted by police in Hong Kong, but was left alone once they realised he was not committing any crime

In addition to working with tiles, Invader is one of the leading proponents of indoor mosaics created using stacks of Rubik's Cubes in a style he refers to as "Rubikcubism". He is also known for his QR code mosaic works.

Invader is a graduate of the École des Beaux-Arts, a Parisian art school, though he tells interviewers he attended a tiling school on Mars.  Invader initially derived inspiration for his creations from video games from the late 1970s to early 1980s that he played when he was growing up, particularly characters from Space Invaders, from which he derived his work name.  Games of the era were constructed with 8-bit graphics, and so lend themselves well to the mosaic treatment, with each tile representing one pixel.  Invader likes tiles for their robustness and permanence.  Invader's first mosaic was installed in the mid 1990s in his home city. It was a sleeper for several years before the full "invasion" programme was conceived in 1996.

"In this project, the idea is to bring the virtual world into reality. One can see many things in it, but it refers to the early days of digital and the video game."

The first wave of "invasion" began with his home city in 1998, and then spread to 31 other cities in France. Since then, Invader's works have appeared in 60 cities in 30 countries around the world. He has invaded New York five times, and Hong Kong on three separate occasions.  He has tagged historic buildings and other locations. One of the more prominent places where the mosaics have been installed is on the Hollywood Sign. The first was placed on the letter D on 31 December 1999 to mark the Y2K bug. During subsequent trips to Los Angeles, Invader placed mosaics on the eight other letters of the sign.

In June 2011, Invader marked the installation of his 1000th work in Paris with an exhibition at La Générale entitled "1000".  Since 2000, the artist has installed in excess of 70 pieces of work dotted around Hong Kong; the artist has declared the third wave undertaken in city, with 50 works, "probably my most accomplished city invasion wave". By June 2011, 77 cities have been invaded, 2,692 Space Invaders placed comprising some 1.5 million ceramic tiles; 19 invasion maps have been published. Invader estimates that more than 15% of his early pieces, ones that were small and placed rather low, have been removed. To combat their removal or damage by building owners, thieves or fans, Invader places many out of easy reach.

In 2012, Invader made a short film Art4Space documenting his attempt to launch one of his aliens into space on a modified weather balloon. Invader is also known for his QR code works. Created using regular black and white tiles, the patterns can be decoded using apps installed on smart phones. One decoded message reads "This is an invasion"